As if hiking into the hot pots was not enough excitement for one day Rob decided he wanted to tube down the Provo Canyon.  I was not as thrilled about this idea as he was (anyone else notice what a buzz kill I am, just thought I should point it out in case you missed it) but he managed to talk Samantha and Hunter into going with him.

Although it was a warm day the water was COLD and Bubba was unsure about the entire thing but Rob convinced him it would be fun. (maybe I am not such a buzz kill after all)

They were ready to go until Rob realized they would have to go under a bridge and maybe it was a better idea to go around.  I would like to point out here that I told him to launch from the other spot about 3 times but he didn't listen (I also love to be right, did you know that?)

After they walked over to the other spot and got ready to launch Hunter decided it was too cold and he wanted to stay with me.  He was not a very happy boy anyway because as we were walking down to the river he was stung by 2 wasps on his back, poor boy!!

This actually might have been a good thing, you are supposed to have life jackets if on the river and while we have life jackets for all our kids Rob and I don't have one.  (Note to self: find adult life jackets on clearance for next summer)  Samantha put on Hunter's vest and Rob managed to squeeze into Samantha's. 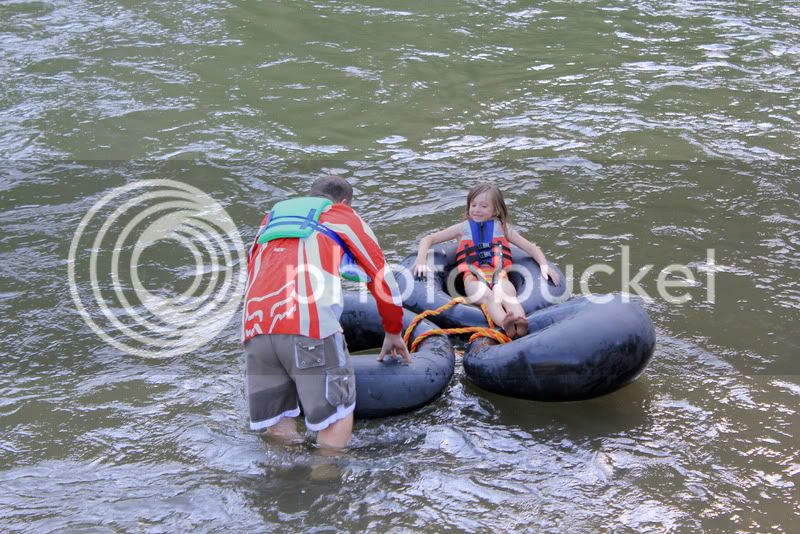 (I told you it was a squeeze)
And then they were off on their adventure down the river.

Hannah, Hunter and I drove down to the pickup spot and threw rocks in the river while we waited for Rob and Samantha.  I had big plans to take pictures of them coming down the river until I remembered I needed to grab their shoes out of the truck, so we hurried down to grab them and came back to see Rob and Samantha about to float past us.

We waved and Rob tried to get over to us and this ended up happening, poor Sam's!!  The tubes started floating down the river without them so Rob had to swim down the river to catch them.  Did I mention the water was cold and they had both managed to stay dry the entire trip down the river.

And while I will admit it looked like fun I think I will wait until next year to attempt it when Hannah is a little older and maybe the water will warm up a bit, at least that is what I am hoping!!