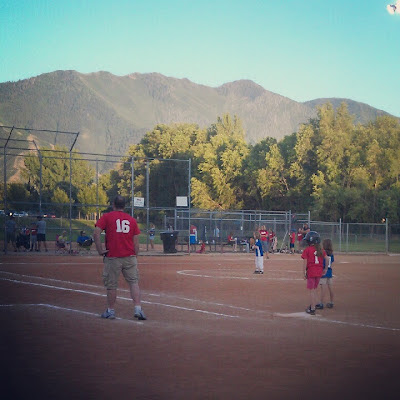 Last night was Samantha's last softball game and we were tied with the team we were playing to see who would go to the State Tournament.

But before I go on I should give you a few need to know league rules so the story makes sense.

It should also be known that I keep score for our team.

Our girls were playing so well last night, we were visitors and by the end of the 2nd inning we were up 8-0. Time was running out so there was no chance the other team would be able to win, we were just playing to finish time.

The other team was batting when they batted out of order, the main score keeper does not track of batting order so it is up to the opposing team to point it out, so I did.

We have batted out of order before and ended up loosing because we came forward and admitted our mistake and took the out, we didn't have to do it but it is the rules and our coach wanted to teach the girls good sportsmanship.

When I pointed out that they had batted out of order the other coach started to get really upset, trying to justify that she had every right to change the batting order after the 9th girl. Although the girl who batted out of order was the 9th girl and she didn't change it with the main score keeper either. She was in the wrong but she was fighting the out.

She looked at our coach and said "It isn't like we are going to win anyway so what does it matter."

At that our coach decided it wasn't worth arguing over, it was just a game, and so she decided to ignore it to keep the peace and just keep playing.

The game kept going and after two outs (the second out should have been the third and the score would have been 8-4) and the bases were loaded, the girl who was up to bat hit the ball so far and ended up getting a home run. The final score was 8-6, going back to the can't score more than 6 runs in the inning no matter what.

The coach and some of the opposing parents tried to argue that it was only fair that the score be 8-8, after all you shouldn't take the girls home run away.

This is when the Mama Bear started coming out, the girl never should have hit in the first place and now they were trying to take away our win.

The head of the league did not back down and said the final score was 8-6, but they calculated the state positions on total points and we were now tied for points and would have to play a tie breaker.

I was floored, what kind of example was she giving her girls, she was not playing fair.

We brought up the out with the head of the league and she apologized (she didn't think it was right either) but said we should have pushed for it but we let them have it so she couldn't do anything.


Hindsight is no fun some days, had we known this would have happened we would have made them take the out.


I felt so bad for them, and all of the Moms on our side were mad, our Mama bear instinct was showing. This was not fair to our daughters and we were going to fight the best we could by cheering them as loud as we could.


Our girls were up to bat first and fought to bring the score to 11-6.

(The score keeper had not changed the board and had the score 10-6 so when she did change it parents from the other team tried to fight it, but you can bet I wasn't going to let them do that to us.)

We had two outs and the girl up to bat had 2 strikes, the next pitch she hit and the teams score was 11-10.

Our little pitcher took the pressure and struck the next girl out, our girls had fought so hard and they had won despite everything. And I hope they learned how important it is to always be honest even if it means you will loose.

I know in games it doesn't always work out so well, sometimes teams cheat and other teams are hurt, but tonight the right side won and I was thankful. 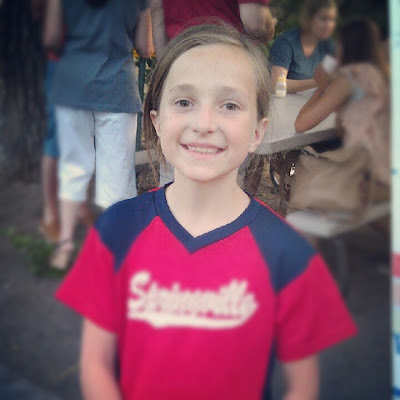 But if there was one good thing to come out of it was during the tie breaker Samantha finally hit the ball. She hit it to first and got out but it didn't matter, she came out of the dugout in tears because she was so happy she had finally overcome this struggle and hit the ball. And of course I cried with her, I start crying just thinking about it.

I am so happy she gets to go to the State game and have more opportunities to bat now that she knows she can do it, and of course she can't stop talking about it. I am so proud of my Sam Bugs!!

Email ThisBlogThis!Share to TwitterShare to FacebookShare to Pinterest
Labels: Mama Bear, My Kids