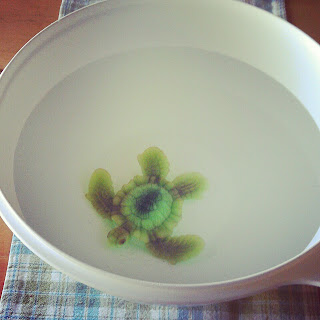 One of my least favorite jobs in parenting is giving out consequences. Sometimes the consequences come naturally from a poor choice and I have to stand by and watch it happen, wanting desperately to take away the pain or hardship, but refraining because I know without these they will not grow. Or worst of all, I have to assign the consequence for a rule that has been broken.

Tonight was one of the night's when I was assigning the consequence. Recently we acquired a turtle that when placed in water grows 600% it's original size. The turtle was placed in a big bowl filled with water and took up residency as the center piece on our table. The only problem is it was very tempting for little hands to reach in and play with the turtle.

When the water was again played with I had to follow through and dump the water out. It wasn't easy, and there were lots of pleading and tears, but I followed through and explained once again that our choices have consequences.

Later when I left for church responsibilities the owner decided to put the turtle back in water, their Dad did not know what had happened earlier and let them do it. When I got home I again had to hand out the consequences and this time it was not as pleasant.

The rule in our house is if one parent says no or gives you a consequence and you decide to go to the other parent to get a yes or get the consequence changed, their will be another consequence and it will be worse.

I once again took it away and in a moment of not so great parenting thought about cutting the turtle to pieces or letting it become the dogs chew toy so it was permanently gone. Of course the voice of reason stopped me from traumatizing my child and I instead took it to my car so I could take it to a garbage somewhere else.

But that was the end of all reason for my child and the name calling started, I was a meanie and the worst Mom ever among other things. It is in these moments I have to find my greatest amount of strength, tell them I love them, and then send them to their room to throw whatever tantrum they choose.

I am then left to myself to feel horrible and wonder if I really am that mean Mom. But I know I am doing the right thing, no matter what I can't give in, no matter what I have to stay strong, because giving in is not an option.

My only consolation is to sit in my room and pass on the mother's curse, that one day they have a child just like them.

But what I really hope is that my children will learn to take responsibility for their actions, that they will know that what they do and the choices they make will determine their future and their happiness.

And that one day they will look back and think: "My Mom, she may not have been perfect, but she loved us, and she tried her best everyday to teach us right from wrong, because she wanted us to be happy and have the best life possible."
Posted by Jaymerz at 6:48 AM

Email ThisBlogThis!Share to TwitterShare to FacebookShare to Pinterest
Labels: Motherhood