The Day Our Lives Stopped - Part One

Today Rob and I were driving in the car discussing when he would go back to work. I told him that he had a stroke and it scared me to death. Because of that I wanted to make sure we did what was best and let himself heal fully so that we did not have the risk of it happening again. He looked at me and admitted that it had really scared him too.

His stroke is one of the worst moments of our lives, it is one we are trying so hard to put behind us, but one that I need to document, if for nothing else but to remember the many wonderful blessings and miracles that took place in this very very dark time in our lives. 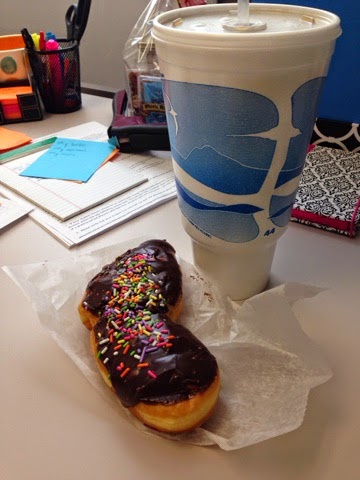 Monday started like any other Monday, except that I felt anxious and on edge all morning. I chalked it up to the craziness that was waiting at work, I had spent the morning on the phone with them while trying to get everyone ready and out the door. I figured I just didn't want to deal with everything that was waiting there for me. I even stopped for a donut and Diet Coke on the way into work, it is my usual stress relieving medicine, it didn't help. At 1 pm when my 3 hours were done I got up and walked out with a muttered "goodbye" to Tracy as I left. I couldn't wait to get home, clean the house, and just relax. I was so tired of this stupid feeling and I wanted to do whatever I needed to do to be done and make it go away.

I know my spirit knew what was coming, sometimes I wish the rest of me would have known too, but I don't know how you prepare for that phone call.

At 2:18 pm the phone rang, the caller ID said Rob, but when I answered the phone it was not my husband, it was Bryan asking if I could come to work. When I asked if Rob was ok he only told me that something was going on with him.

Bryan told me later that he picked up Rob's phone and pressed the button to turn it on. It came right up with my picture and the call button. Rob had called me at 12:30 when he was grabbing lunch, but I am certain he used his phone after that so it wouldn't have still been on the call screen. I believe it was a miracle, a very tender mercy from our Heavenly Father, that the number was right there when it was needed.

It was the first of many miracles and tender mercies we would receive.

When I pulled into the parking lot there were 2 ambulances and I knew immediately it was bad. Bryan was waiting by the door, I followed him back to where Rob was on a stretcher. The right side of his face was drooped and he could not speak or move anything on his right side. I knew immediately Rob was having a stroke. When I walked into the room he took one look at my hysterical face and smirked, I wanted to smack him, but I was also relieved he seemed to still be himself and aware.

I gathered what information I could and started making arrangements for our kids as the EMT's wheeled Rob out to the ambulance. I was told later that Rob looked straight at me when they were taking him out and said "I will be fine". This really surprised the EMT's because he could not say anything to them before or after those 4 little words, but he was able to reassure me that he would be fine. I wish I remember this but I think I was a little preoccupied with getting everything in place.

Now that I look back on not only that, but also how clearly I could think and  deal with everything, I am amazed at not only the power of our spirits, but also the power of the Holy Ghost and his ability to comfort us and guide us through our darkest times. I have never felt him closer than I have in the last few weeks and I hope I can do what is needed to keep him that close all the time.

I called the kids school to let them know that Bryan would be picking them up from school and then deliver them to my dear Sister in Law Katie who would keep them for the next 2 days until my Mom could get here. They were so very well taken care of the entire week we were in the hospital and I was grateful I didn't have to worry about if they would be okay and I could focus on taking care of Rob.

Kristy, who also works with Rob, drove me to the hospital and filled me in on what happened at work:

Rob had walked into Bryan's office and he dropped his cup on the ground. He said he was not feeling well and went back into his office to sit down. Another engineer came into Rob's office to ask him a question and Rob started talking about rabies. That engineer immediately went to get Kristy who used to be a first responder to check on him, she realized what was happening and called 911. The ambulance was there in minutes, which was another blessing because when dealing with a stroke the faster you get help the better.

I am so extremely grateful that Rob was not alone when this all happened, I try not to think about what could have been if he had not been surrounded by people who were paying attention.

When I arrived at the hospital they were getting him settled into the ER, hooking up IVs and getting ready to run their tests. They wheeled Rob out to do a CT scan and figure out what type of stroke he was having. The stroke team came in to give me information and also to ask questions to fill in the gaps and get a better idea of what they were dealing with. All of the movement and questions were overwhelming, I was trying to understand everything but I just couldn't.

The Stroke team asked my permission to give him a medication to stop the stroke. They explained the risks and that 4% of the people who were given the medication had died. I didn't know if I could give my permission, I told them I didn't know. How do you say yes to something that could potentially kill your husband?!?! They told me I would have to make a decision but they would give me some time to think.

They walked out and I immediately called my Daddy, I didn't know how to answer their questions and I just needed help. When he answered the phone I heard him ask someone to hold for a minute. I told him what was going on and without hesitation he told me he was on his way.

My Mom told me later that he almost hit the ignore button on his phone but he stopped and answered the phone instead. He was so grateful he listened and said he would never ignore another call from family again.

When the stroke team came back in I gave them my permission to give him the medication, but also asked if they knew Kim. She was in my old ward and I remembered her telling me once that she tracks strokes from the minute they walk into the door until they leave the hospital. Thankfully they did know her, she was working, and they called her for me. I told her what was going on and she was there in minutes to hold my hand and help me understand exactly what was going on.

We had actually run in to Kim the Friday before all of this happened at Panda Express. Rob and I were out on our usual date night and she was standing in front of me in line with her kids picking up dinner. I am certain now this was no accident we ran into each other that night, The Lord knew I would need her and he put her in my path so she would be in my recent memory to call on when I needed her help.

I also called Rob's cousin Chad and Katie's husband Nase to ask if they would come and give Rob a blessing. They also didn't hesitate and came immediately, I was so grateful!!

When they brought Rob back in from his CT they told me because of the type of stroke Rob was having, a hemorrhagic stroke, they could not give him the stroke medication, I would be lying if I didn't say I was grateful.

I saw quite a few doctors at that point who showed me the CT scans, pointed out the pool of blood in his brain, and explained that he couldn't speak because of where the hemorrhage was located. They also told me his blood pressure was really high and that was probably what had caused it. They were going to work to get him stabilized and then transfer him to the ICU where they wpuld run more tests to determine the exact cause.

Chad and Nase both arrived a little while later and gave Rob a blessing, there was an amazing feeling of comfort that filled the room. Once again there was the assurance that he would make it through this and fully recover. Everyone made sure we were okay and at Rob's request everyone left and we sat in a dark room waiting and watching monitors.

As I watched the monitors his blood pressure started dropping and he began to start lifting his arms and legs again. I knew it was because of the blessing he had received. I have never been more grateful for the blessings of the Priesthood in my life. I have wondered the last few weeks how others survive without this knowledge and power in their lives, I can not imagine my life without it.

Eventually the nurses came to transfer him to the ICU where we would spend the next 6 days.
Posted by Jamie M. at 8:04 PM