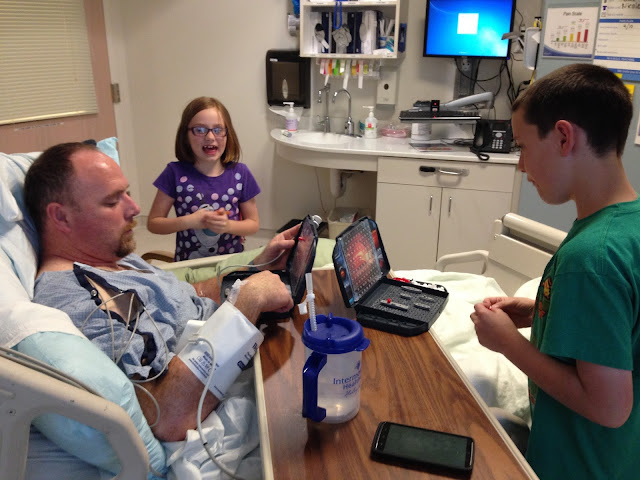 I sent my family a text and told them that progress was slow, but that was probably only because during the first two days Rob had such amazing progress. Now it was just a waiting game, waiting for his blood pressure to stay low with medication and no IV drip.

When I came back to the hospital Wednesday morning Rob was in the shower, I think he was so relieved to finally feel somewhat human. Once he had breakfast and was napping I ran into work to get things settled and bring something to work on to the hospital while he napped, although I did find a somewhat comfortable position to nap along side of him.

My Mom also came on Wednesday to stay with the kids at our house and help out, I was so grateful to have her there, I would come home from long days at the hospital and she would listen to all of my fears and frustrations, not to mention she took the best care of my kids and kept their minds off what was happening.

Truth be told Wednesday was not my favorite day. Rob was cranky and very mad at me and the doctors. He was convinced he was fine and we were all keeping him there for no reason. I understood his frustration and tried really hard not to take it personally, after all no one wants to hang out in a hospital bed. 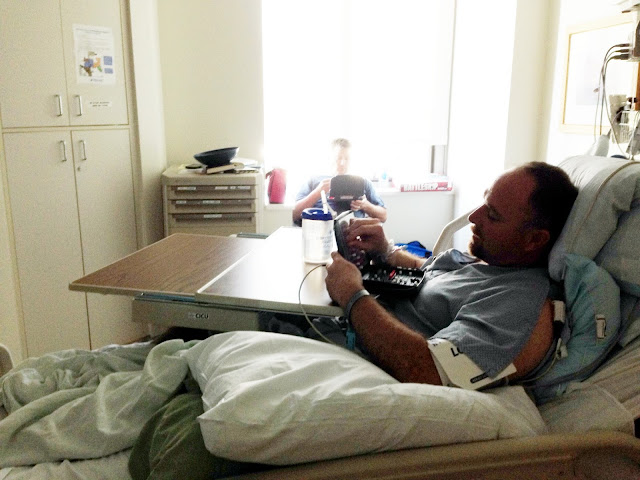 Thursday morning I woke up with a resolve to find things to help make the time in the hospital a little more enjoyable, one of us had to keep a positive attitude. Thankfully Thursday morning he was in much better spirits and ready to do whatever was needed to get out of there. I brought the iPad so he could watch Netflix, the game of battleship and cribbage. Rob enjoyed a few games with his cousin and Hunter which seemed to help with the boredom, along with lots of naps.

Wednesday through Saturday were filled with the same routines:

Rob was having his blood pressure checked constantly, he ended up having both of his IVs infiltrate and was in a lot of pain every time the blood pressure cuff would go off. He started to watch the clock and tense up whenever the cuff would go off, which only made his blood pressure spike. We moved the cuff around and kept warm heat on his arms to help with the pain. But it was still very uncomfortable and he really struggled so we tried to get him to relax and breath through the pain, not an easy thing to do.

He was also receiving daily visits from the speech therapist, physically he was fine, but his speech was off and he could not retrieve words when he needed them. We worked through sheets of naming simple pictures, coming up with opposites, and groups of five things.

She asked him to name 5 vegetables and he struggled to get three, I didn't know if that was a failure on my part because maybe our vegetable variety is not so good. She would then have him switch to 5 fruits and it was a struggle to name fruits, he kept saying vegetables. But then she asked him to name 5 parts of a plane and he rattled those right off without hesitation.

She also had him email the kids so he could work on his typing and forming complete sentences. The kids loved getting the emails from him, they really missed their Daddy.

We also took walks around the ICU, and had lots of visitors, but we were both very ready to just be home. 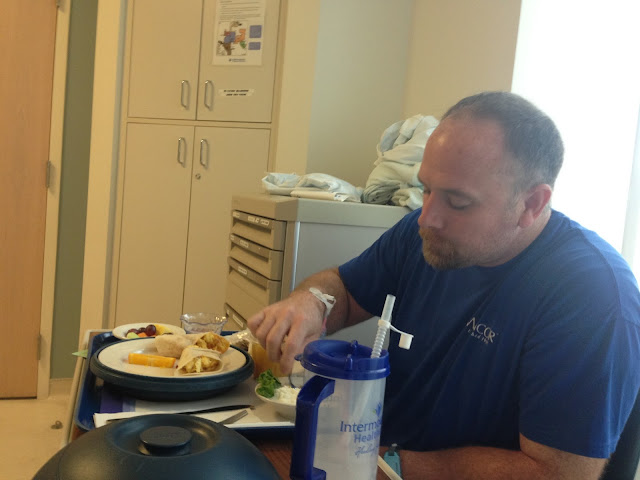 On Sunday morning the doctor came in and asked if Rob wanted to go home. He couldn't even wait for the nurses to start pulling off all of his cords he was so excited. We ordered him breakfast and he took a shower and put on real clothes instead of his hospital gown. I packed up his room and hauled stuff to the car. It felt like an eternity until they came back with his release papers. The nurse walked us down to the lobby and gave us both big hugs before we left.

Our discharge instructions included a visit to the rehab doctor, appointments with the speech therapist, a visit to the sleep center, and a follow up with the neurologist, along with medication to regulate his blood pressure and an order to find a family doctor immediately.

I told my Mom that we were on our way home but not to tell the kids, I wanted it to be a surprise. As we were pulling into the garage Hannah peeked her head out the door and then screamed when she saw Rob, all the kids came running so happy to finally have their Dad home.

We were all very thankful to finally be home and ready to do what we needed to get Rob back to full health.
Posted by Jamie M. at 6:48 PM