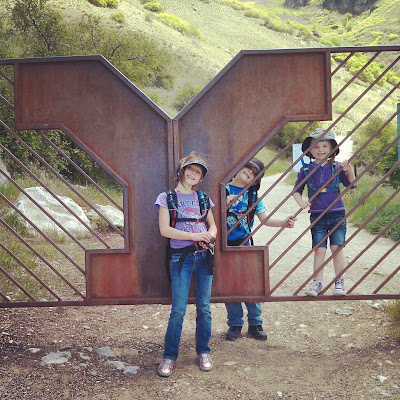 We found ourselves on Saturday with nothing to do, which after moving back to Utah is something that rarely happens, so we looked at each other and wondered what we should do to fill our time. I have been talking about hiking the Y for a few months and it seemed like a good day to do it. Rob was a little hesitant but I finally convinced him he would not be any less of a True Blue Aggie if he hiked the Y.

We decided it would also be fun to bring Daisey along with us. When Daisey was a little over a year old she was hit by a car and lost her back leg, she walks with a limp, but when she runs you would never know she was missing it. I wondered if she would make it but she may have out hiked us all. On the way back she practically ran down the mountain, I think because she just wanted to lay down and not get up again.

The kids all did great, there may have been a tiny bit of whining on some of the switchbacks, but for the most part they hiked like champs. They were so proud of themselves when we made it to the top, and I was very proud of them for making it all the way up there, it is not the easiest hike.

We made it to the top in 45 minutes, Hunter decided he wanted to hike it again at the end of the summer and see if we could do it faster and surprisingly everyone agreed.
Posted by Jaymerz at 6:54 AM