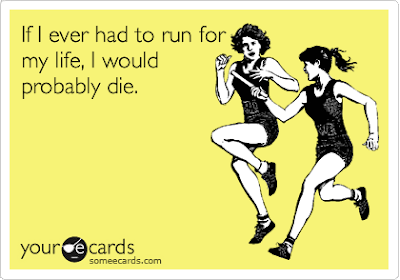 I HATE running, I don't even know if hate is a strong enough word, loathe, despise, detest, either way running a marathon is not something that will ever be on my "To Do" list.

My husband thinks if I would just do it I would enjoy it but as I have told him many times it just won't happen. In High School they made us run every day, I HATED IT, but I still had to do it!!

My sister asked me a few weeks ago to be on a team she was putting together for a 5K Mud run, "it will be fun" she told me, but I thought of a bunch of things way more fun to spend the $40 entry fee on......

She also came in 2nd on her 100m so very close behind the girl who came in 1st.

She was so excited and found she really loved running and maybe she would like doing track. So like the good supportive Mom I am, I told her she should start running more and if she needed someone to run with..

her Dad would probably like the exercise and would love to start running with her.

Email ThisBlogThis!Share to TwitterShare to FacebookShare to Pinterest
Labels: Actvities, My Kids