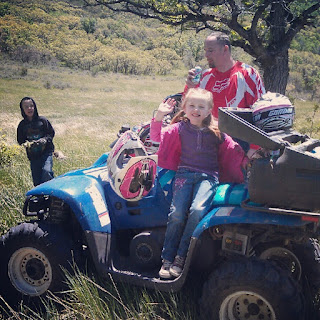 I didn't know if I could write about this, but I am hoping if I write it all down I can stop thinking about it.

Blogging is cheaper than therapy.

We decided to take the kids out on Memorial Day to go riding on a trail we had found earlier this month. We loaded up and headed out, made it to the top of the mountain, and stopped to enjoy the view. We talked about how great it was to be out riding, one of my favorite activities. We then decided to keep going on the trail down the other side of the mountain. Hannah decided to hop on with Rob, Hunter tried to come with me and Samantha on the 4 wheeler but it wasn't working so Rob took both him and Hannah on the motorcycle.

A little further down the trail was pretty washed out, we hit a rock and the 4wheeler flipped. I stuck my foot out trying to hold it up so Samantha could jump off before it rolled over on top of me pinning me to the ground.

Rob thankfully was right there and quickly unloaded the other two and rushed over to pull the 4wheeler off of me.

I was panicking because I didn't know if Samantha had made it off and so I didn't know if she was ok. When Rob got it off I saw her sitting on the other side of the road with only a broken visor on her helmet.

I am pretty bashed up, my shoulder is bruised and sore, my back is very stiff today, and my legs are very bruised. But through it all I can't help but be thankful because it could have been much worse.

I am grateful that I am the only one hurt and I would take all of this a million times over to keep my girls safe.

It all keeps running through my head and there are many what ifs. My biggest is "what if Hannah had been on the 4wheeler with me". I hope I would have found a way to protect her like I did for Samantha (all though I am sure there were angels watching over my Samantha who helped her off, just like I am sure there were angels watching over Hannah and keeping her in a safe place with her Dad), but I can't help but think of the 4wheeler rolling over on top of Hannah if she had been with us.

I couldn't sleep last night, I laid there letting the entire day run through my head, feeling very grateful everyone was safe at home, but also consumed with the fear of "what if".

I went into Hannah's room and scooped her up, took her down to Samantha's room where I could snuggle them both in my arms.

I will forever be thankful we are safe, thankful we were protected, and very thankful I get to be Mom to these three amazing kids!!
Posted by Jamie M. at 9:37 PM